My Opinion: 6.1 || A hugely popular movie that I enjoyed but didn’t love — very entertaining but too comfortable to achieve real poignancy. On the significant plus-side: It moves briskly, it’s consistently funny, and never becomes saccharine. Couldn’t wish for better with the performances. But the same play-it-safe qualities that make it such a pleasure also keep us from being as moved as we might be.

SYNOPSIS (Courtesy of IMDb): After he becomes a quadriplegic from a paragliding accident, an aristocrat hires a young man from the projects to be his caretaker.

Strengths and Weaknesses: No separate discussion of strengths and weaknesses because they’re so closely related. What we have here is a very skillful exercise in genre button-pushing: a feel-good comedy in which everybody means well and gets what they need.

The dialogue is funny and sharp, and the tone is well balanced throughout. But because we never for a second doubt that everything is going to turn out fine for everyone, there’s not a lot of emotional weight despite the seriousness of Philippe’s condition. The conclusion feels both rushed and overly neat — Nakache and Toledano quickly tying up all the little threads in a pretty bow that would unravel if you pressed on it.

Performances: Great acting across the board, especially from Francois Cluzet, who’s very warm and convincing as the quadriplegic Philippe. Omar Sy is wonderfully charismatic and handsome as Driss. The movie would be nothing without their performances. 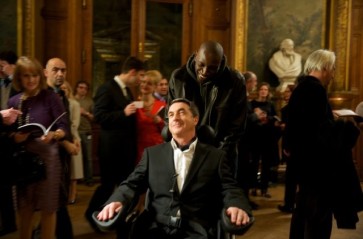 Best Scene: The movie is so uniformly efficient and clean that there are few high or low points, making it hard to pick out any one scene. I’ll choose the opening, which smartly shows us right away that of course these two mismatched people will become friends. It’s an entertaining start and spares us any phony suspense. Bonus credit for the scene that doesn’t happen — there’s a gratifying absence of moments intended to make us reach for the tissues (consider this the plus side of the movie’s light emotional touch).

One thought on “The Intouchables (Day 17)”