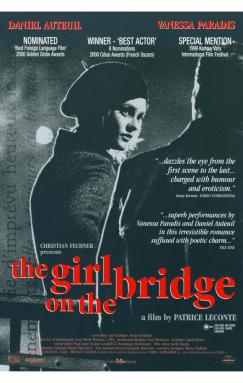 My Opinion: 8.2 || Charming romantic comedy — a delight through and through. The characters are well drawn, the dialogue is witty, and the touches of magic arrive in perfect measure.

SYNOPSIS (Courtesy of Netflix): A despondent girl named Adele (Vanessa Paradis) is about to take a swan dive off a bridge into the Seine River when she’s rescued by Gabor (Daniel Auteuil), a knife thrower who needs a human target for his show. The luckless Adele agrees, and together the pair thrives. They win a fortune gambling when not performing their act, but fate conspires to separate the duo, who find they need each other to maintain their lucky streak.

Finally: It took 76 films, but I finally watched a completely successful comedy. There are a few that I’ve enjoyed (3 Idiots, Stolen Kisses, The Intouchables), but all had their shortcomings, and I’ve been sorely disappointed by some (Key of Life, Castaway on the Moon).

Strengths: Such a joy — a whimsical, sharp-witted delight that perfectly blends comedy and romance.

Note the run time: 90 minutes. Unlike Key of Life and Castaway on the Moon, which are labored and too long, Leconte doesn’t lean on his jokes or allow the story to lag. Even more important, the plot never settles into predictability. In those other films, we can see where the story is heading before it’s barely begun, but here Leconte flirts with our expectations and sprinkles the story with small surprises.

As the movie progresses, a subtle supernaturalism takes hold: Adele and Gabor hold conversations even when separated by barriers and distance. It’s never explained or even winked at, which is crucial: because the characters regard it as perfectly natural and because Leconte treats it that way too, the magic feels organic to their relationship and the film.

Weaknesses: If I wanted to be difficult I might question the occasional plot point (what happens to that uber-expensive car?), but when the storytelling is this winsome, the desire to be difficult isn’t there and the details hardly matter. And it would be fair to say that the opening sequence, which is more “written” than the rest of the film, doesn’t logically fit into the subsequent narrative. But the writing is delightful, and it entertainingly establishes both Adele’s character and the film’s themes.

Characters/Performances: Forced eccentricity is the bane of comedic writing, delivering characters who are never more than the sum of their quirks. Here, though, we have characters whose peculiarities are portrayed with depth and conviction. Daniel Autel’s performance in The Intouchables was the highlight of that film, and he’s equally good in this role, which requires a finely tuned balance of irritability and charm. Vanessa Paradis has fewer complications to manage in the part of Adele, but her character is every bit as critical — it’s really a two-person film — and she couldn’t be better.

Best Moments: The initial scene on the bridge is the film’s wittiest. There’s a delightfully scored makeover scene in Monte Carlo. And one of the later knife-throwing scene stands out for its sensual intensity. But the most impressive moments are the ones in which Adele and Gabor talk to each other while apart — a playful bit of magical realism that arrives with intoxicating ease.