The Color of Paradise (Day 69) 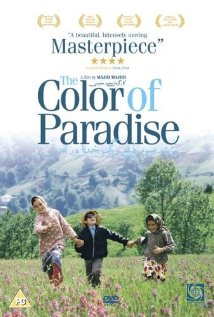 My Opinion: 7.7 || Gentle movie that teeters between heartwarming and heartbreaking. The characters are believably rendered, the scenery is lush, and the story successfully balances the bitter and sweet.

SYNOPSIS (Courtesy of Netflix): Awash in the sights and sounds of an Iranian summer, this moving family drama stars Mohsen Ramezani as Mohammad, an 8-year-old blind boy whose poor widower father (Hossein Mahjoub) nearly abandons him at a school for blind children. Welcomed home by his grandmother and sisters, the bright boy is eager to immerse himself in the world of the seeing — but his father fears Mohammad may hinder his attempts to remarry into a prosperous family.

Strengths: The mountain setting provides a view of Iran that’s not commonly seen. There’s great attention to the rhythms and details of everyday life, and the story consistently rings true. The blind boy Mohammad comes through as a three-dimensional person, and his story is free of tear-jerker manipulations.

Weaknesses: Slow-motion is one of my least favorite cinematic devices.  There are times when it can be just the thing (Raging Bull), but it’s hard to pull off and can easily trigger a cheesiness alarm. There are a couple effective uses here, but it more often comes off as a “directorly” intrusion that distracts from the spell of naturalism that Majid Majidi casts with otherwise good success.

The conclusion works, but just barely — it’s a turn to overt tragedy and emotionalism that almost violates the natural tone that Majidi has established. We end, though, with a nicely ambiguous shot that echoes earlier elements and brings the story to a touching close.

Characters/Performances: Every character is well presented, even ones we barely know, including all three of Mohammad’s teachers through the course of the film. Mohammad (Moshen Ramezani) is a strongly sympathetic figure, but Majidi stops short of romanticizing him, which is crucial — he’s neither pitiful nor idealized. You could argue that Mohammad’s adorable sisters are improbably perfect, but it’s hard to complain because they add important emotional balance. The same could be said for the character of his kind-hearted grandmother.

Majidi’s greatest challenge and accomplishment is the handling of Mohammed’s father, played by Hossein Mahjoub. As much as we dislike the choices he makes and the lack of affection he shows, he’s a consistently credible and even sympathetic character whose behavior is rooted in recognizable needs and concerns.

Best Moment: Several good moments, including a silent scene showing the dying of wool for a rug — poignant because it emphasizes, but not too obviously, the richness of the colors that Mohammad can’t see. Equally fine is the opening scene in which Mohammad tends to a bird that’s fallen out of its nest; a metaphor for his own situation that works because Majidi doesn’t oversell it.

The finest moment, though, is also the most heart-wrenching, when Mohammad breaks down and says, “Our teacher says that God loves the blind more because they can’t see. But I told him if it was so, He would not make us blind so that we can’t see Him. He answered ‘God is not visible. He is everywhere. You can feel Him. You see Him through your fingertips.’ Now I reach out everywhere for God till the day my hands touch Him and tell Him everything, even all the secrets in my heart.” Everything about the scene is perfect, and Majidi returns to this idea in the lovely concluding image.