Viewing Note: Until now, I’ve maintained a rule against repeating directors. But beginning today and through the final two weeks of the project, I’ll be returning to directors whose films I’ve watched over the last three months.

SYNOPSIS (Courtesy of Netflix): When Kanji Watanabe, a stoic government official in post-war Japan, learns he has terminal cancer, he suddenly realizes he’s squandered his life on meaningless red tape and has no close family or friendships to lean on. Resolving to use his remaining time wisely, he sets out to steer a children’s playground project through the bureaucracy he knows so well.

Strengths: The core message — life is short: embrace it — seems taken from a platitude factory. But Kurosawa smacks banality aside and plunges deep into his character’s psyche to capture the terror of mortality and fear of squandering life.

In the first half of the film, as Kanji Watanabe reels from his terminal diagnosis, he lurches in about, trying to find what it means to live life deeply. Along the way, he encounters characters who seem pivotal, only to pass from the story. It’s a mature and subtly powerful tactic. By withholding the pleasures of symmetry and durable connections, the film reinforces Watanabe’s implacable, one-way advance toward death. 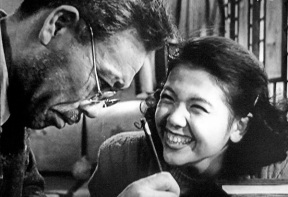 We begin with a straight-forward narrative structure that Kurosawa twists at the mid-point — a shrewd move that saves the story from getting too rote and that introduces fascinating angles. Increasingly, the film feels like bookend to Kurosawa’s Rashomon (made two years earlier), with characters battling over different interpretations of the same events. The approach is more radically elemental in Rashomon, but it’s used to stimulating effect here as well.

The refractory interpretations of the final act are set at Watanabe’s funeral, which lends the section great melancholy weight. As Kurosawa’s camera settles on the picture of the Watanabe — abruptly gone after dominating the first half — we’re forced to imagine our own absence from life. How will I be talked about at my funeral? Will I be neglected too? Will I be understood?

By blending discord with affection, Kurosawa delivers emotional encouragement uncontaminated by glib reassurance. Watanabe’s victory over despair is transcendent — and beautifully modest. Your life can have meaning, Kurosawa tells us, and you can touch the world, but your impact will be glancing and your meaning easily missed.

Weaknesses (spoiler alert): My unease with voiceovers surfaces again here. There are some great uses of movie narration (Badlands, Double Indemnity), but the vast majority are either extraneous or a crutch. The narration here is sparse, so little harm is done. But in a story as elegantly direct as this, the insertion of omniscient commentary only occludes the narrative flow.

The film’s secondary theme — that government bureaucrats should be more public-minded and responsive — is handled well but suffers from comparison to the primary theme. It’s a fine point but not especially profound, and it often feels like a mundane distraction from the film’s examination of mortality.

Similarly, there are a few points in the first half when the movie becomes a tad labored — Kurosawa going to more effort than is necessary to drive his points home. His cinematic technique is so vigorous and visually interesting that you often don’t mind, but the themes require less underlining than they get.

Finally, the last scene: It’s nearly perfect. But not quite. Rather than concerning himself with a character of little importance, Kurosawa would have been better off remaining on the image that so well represents Watanabe’s life and death. It’s only a few seconds but still amounts to a tiny anticlimax.

Characters/Performances: I wish I felt better about Takashi Shimura’s performance. He delivers genuine pathos and doesn’t prevent the film from achieving greatness, but there are several moments when he oversells Watanabe’s emotions. Not all over-acting involves scenery chewing; you can also over-act by over-moping and over-hunching, which is what sometimes happens here. The performance is affecting in many respects — a few scenes are wonderful — but this is another place where less would have been more.

Of the film’s many strengths, the foremost might be Kurosawa’s devastatingly unsentimental handling of Watanabe’s son Mitsuo. At the outset of the film, when we see the distance between them, we expect some kind of reckoning — some cathartic moment, good or bad. But Kurosawa leaves their relationship unresolved and Watanabe’s longing for connection unmet. Very few storytellers (in any medium) would have the wisdom and courage to do this, let alone pull it off so beautifully.