My Opinion: 7.6 || Contemplative and beautifully filmed. There’s a delicate loveliness to the structure of the film and quiet power in several scenes. However, characterization is thin, providing only tokens of personality and emotion.

SYNOPSIS (Courtesy of IMDb): Under the vigilant eyes of Old Monk (Yeong-su Oh), Child Monk (Jong-ho Kim) learns a hard lesson about the nature of sorrow when his childish games turn cruel in a story that’s divided into five segments, with each season representing a stage in a man’s life. This exquisitely filmed drama directed by Ki-duk Kim is entirely set on and around a tree-lined lake, where a tiny Buddhist monastery floats on a raft amidst a breathtaking landscape.

Strengths: The physical setting is placidly beautiful. Not only the scenery but every closely observed inch of the tiny monastery. (The master touch: a doorway in the middle of a room. The characters are consistent about using the door, rather than simply walking around it — a custom that, touchingly, is never acknowledged.) Kim is gracefully subtle about incorporating animals into the environment, and he skillfully uses the passing seasons to portray not just the march of years but also the stages of maturation.

The opening chapter is the film’s best, with a parable-like exploration of nonviolence and atonement. Unfortunately, though, none of the subsequent chapters achieve the unassuming power of this initial sequence.

Weaknesses: The elder monk is an outstanding character, a perfect embodiment of spiritual wisdom and personal decency. Unfortunately, Kim falters with his depiction of the young monk. As a boy in the opening segment, the portrayal is deep and convincing, but the next two chapters are less successful in developing him as a character. That’s partly due to limitations in the acting range of Young-min Kim, who struggles, particularly in the “Fall” chapter, to express powerful emotions convincingly. The deeper problem, though, is that Ki-duk Kim has a limited view of the young monk’s character, never going very deep. He’s a symbol of maturation, not a person who matures.

This is the point where I bring in Ki-duk Kim’s Pieta, which is a cruel, insipid mess. Spring Summer is vastly better, but some of the same obsessions are on display. Kim appears to construct his characters from the outside in: He conceives of an idea he wants to dramatize and then concocts a character to suit the need. That can be a fine place to start, but it seems Kim doesn’t make the additional effort of imbuing him or her with a credible inner life. The character remains a device.

Furthermore, Kim has little use for characters who aren’t holy or in torment, particularly torment that involves mortification of the flesh. It’s a strangely medieval temperament — the Mel Gibson school of catharsis-through-agony — as if spiritual and emotional pain can only be dramatized with blood. I’ll admit that if I’d watched Spring, Summer before Pieta, I likely would not feel the same discomfort. But, as it is, Kim’s preoccupations are too glaring to ignore.

The concluding segment is moving and well staged — but only if you conveniently ignore the small matter of child care. It seems that grand ordeals of suffering are too important to let narrative sense get in the way. It’s so peculiar to have a director capable of such grace but also prone to such clumsiness.

Best Moment: The movie is filled with superb moments, often very small. One example: a scene in which the old monk writes characters with water — by the time he finishes, the first words have already evaporated. 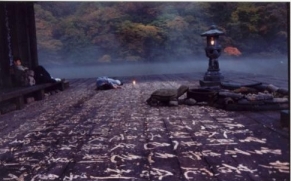 In the outstanding first chapter, the old monk imposes a deserved ordeal that’s profound in its simplicity. The scene sets up the grand ordeal of the film’s conclusion. For my money, though, it’s the more impressive of the two because the quiet modesty of the sequence enhances its moral acuity.