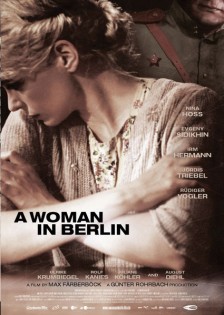 My Opinion: 7.4 || Courageous look at fear and survival in Berlin at the start of the Soviet occupation. Based on an anonymous first-hand account published (and then removed) after the war, the film is clear-eyed in its depiction of the often brutal Russian treatment and the desperate, morally compromised (and mostly female) German citizens. The movie’s characterizations and narrative are not as deep as they could be, but there’s great integrity and power throughout.

SYNOPSIS (Courtesy of IMDb): A woman tries to survive the invasion of Berlin by the Soviet troops during the last days of World War II.

Strengths: As the Soviet army approaches, we feel the terror of Berlin’s remaining citizens, hungry and huddled in basements, not knowing what their reckoning will be. In the scenes that follow, they struggle to make sense of this frightening new world and to read the intentions of their occupiers. What develops quickly is a regime of rape. Writer-director Max Färberböck is direct, as he needs to be, in depicting the humiliation and brutality inflicted on these women, but he’s also careful to avoid exploitation.

The movie’s most striking and interesting moments depict the women’s gradual adaptation to the realities of their situation. They come to realize that rape — repeated and routine — is unavoidable and that their survival depends on navigating (and exploiting when they can) this new social order. Customs develop. Alliances form. And some small, tentative affections blossom.

It’s important to note that when Anonymous (Anonyma) published her diary, she was assailed for defaming German womanhood. A grossly unfair and morally blindered response — not to mention obscene given what German manhood had been engaged in all across Europe. 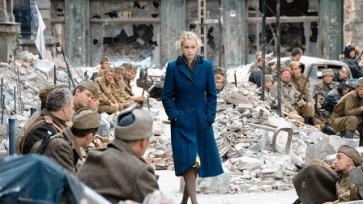 Weaknesses: As illuminating as the movie is about the necessities of survival and the formation of bonds, Färberböck could have taken us even deeper. To adhere to standard movie structure, he makes limited use of the diary format — Anonyma is presented as a protagonist more than as a reporter, which overlooks some of the story’s potential. (I read excerpts when the book was released in English a few years ago.) I frequently find voiceover narration in films to be lazy or superfluous, but here I wanted more, and it would have been well justified by the source material.

The film touches on the women’s dawning recognition of the horrors perpetrated by the Nazi war machine. But those moral aspects of the story don’t receive enough attention. It’s not that we need melodramatic epiphanies, just that the film misses an important opportunity to explore vital questions about culpability.

The obvious comparison is with Lore, which covers the identical time period, also from the perspective of German civilians. But while Lore is similarly powerful in depicting the realities of survival in a collapsed, occupied country — it also does full justice to the moral dimensions of participation in the Third Reich. Both films are very good, but Lore provides a more ambitious, revealing, and important story.

Characters/Performances: Good performance from Nina Hoss in the complicated role of Anonyma. Evgeniy Sidikhin is less effective, however, as the Russian major to whom she becomes attached. It’s not an obviously flawed performance, but his personality never comes into full focus. More problematic is the relationship itself — the contours are interesting but it feels sketched rather than drawn, and the climactic scene between them lacks the emotional weight that it should have. 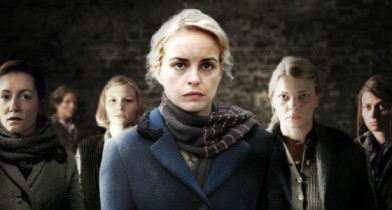 Best Moment: The standout scene in my estimation is one that some viewers might find off-putting. The women sit around a table engaging in gallows humor about their sexual encounters with Russian soldiers. Essentially, they’re talking shop — a great scene because it goes beyond their victimhood to portray a range of emotional and intellectual resilience.