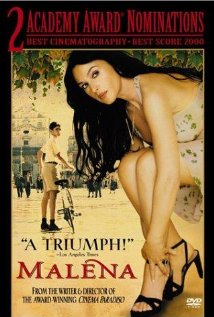 My Opinion: 5.4 || Beautifully shot but the tone is awkward and inconsistent, with a story that struggles and mostly fails to amount to something. The film continually adopts a farcical tone that’s discordant with the story’s underlying tragedy, and the character of Malèna is never allowed to be more than an object of beauty.

SYNOPSIS (Courtesy of Netflix): When 12-year-old Renato catches a glimpse of beautiful new bride Malèna, his heart skips a beat. But when jealous town busybodies begin spreading vile rumors about her, Renato must incorporate those falsehoods with what he knows to be true.

Strengths: Lovely cinematography and set designs that create an amber-hued but distinct vision of coastal Sicily during the Second World War. The war is an important presence throughout the movie, and you can glimpse some parallels between the Italy’s fascism and the town’s treatment of Malèna — a potentially interesting theme that winds up being underexplored. The depiction of sex-obsessed boys is convincing, and the role of fantasy is sometimes (but only sometimes) well-presented.

Weaknesses (Structure): In a movie that wants to decry objectification, the central character is never more than an object. It’s a significant problem that director Giuseppe Tornatore never overcomes. Time and again, he tries to have it both ways: He wants to criticize the superficiality of the male gaze — but gazing is all his camera ever does. The film’s many, many views of Malèna are sensual but never insightful. We’re meant to see it as tragic that no one can look beyond Malèna’s surface beauty, yet Tornatore’s camera does little else.

Weaknesses (Tone): In what’s essentially a tragic story, Tornatore delivers far too much broad comedy. The town’s men are nearly all portrayed as lust-addled buffoons, and its women are uniformly mean-spirited and petty. (Malèna, it seems, is the one curvaceously sexual woman in all of Sicily.) Scene after scene is played for humor without ever being humorous. You get the sense that Tornatore is trying to impose distance — to distinguish the town’s crass obsession with Bellucci’s face and figure from his own supposedly more enlightened obsession with her face and figure.

Weaknesses (Character): Monica Bellucci is a world-class beauty. But she has only a handful of lines. And I can’t remember any of them. That’s a not a fault of her performance — the problem lies with Tornatore’s vision, or lack of vision, for her character.

Tornatore has two goals for Bellucci: To be beautiful, which she does brilliantly. And to show composure in the face of coarse ogling, which she also does well. But the film provides no insight into her personality or inner life. Tornatore might claim that he’s simply portraying his young protagonist’s limited perspective. But a resourceful filmmaker genuinely committed to characterization could have rendered Renato’s perspective while also fully humanizing the object of his obsession.