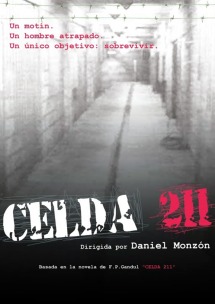 My Opinion: 6.9 || Thrilling first hour that leads to a disappointingly strained and messy second half — too many developments that smell like a screenwriter’s outline. Even with those flaws, though, it’s a sharp, exciting movie.

SYNOPSIS (Courtesy of IMDb): The story of two men on different sides of a prison riot — the inmate leading the rebellion and the young guard trapped in the revolt, who poses as a prisoner in a desperate attempt to survive.

Strengths: The movie’s opening is terrifically efficient and gripping. After a silent, eerie prelude, we move briskly through a set-up that believably drops the young guard Juan (Alberto Ammann) into a predicament that should be hopeless. His quick-thinking over the first forty-five minutes is exciting to follow and laid out with great skill by director Daniel Monzón. There’s good balance initially between Juan’s story and the staff and negotiators on the other side of the barricades.

Weaknesses: After a thrilling and credible start, Monzón begins losing control of the narrative and squanders the credibility built up in the first act. The story gets tangled in contrived complications, and the behavior of the characters increasingly defies belief.

Juan’s evolution makes sense up to a point, but Monzón pushes it too far. It’s as if the script has been concocted to fit a diagram of character development. Other characters travel in similarly artificial directions, driven by the over-written plot. The pressure to keep laying on complications and conflicts other leads to a gummed-up plot, which is a shame given the simple strength of the set up. By the time we reach the climax, nothing seems very credible anymore.

Characters/Performances: Alberto Ammann, who resembles a Spanish Jake Gyllenhaal, manages to hold his character together despite increasingly thin foundations. His opposite, Luis Tosar, is excellent as Malamadre, the leader of the revolt, and his character benefits from greater consistency. We need to accept that he would immediately take to this (purportedly) new prisoner and place immediate trust in him. That’s a reach but within the limits for suspension-of-disbelief in a good thriller. What’s harder to accept is his increasing indulgence of this one new guy over everyone else.