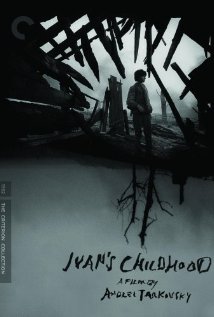 My Opinion: 7.2 || Tarkovsky is uninterested in the mechanics of the war and can barely be bothered with plot — the emphasis here is on subjective emotion, moral struggle, and striking visuals. It’s a war film with great moral integrity, but it can’t be pigeonholed as “anti-war.” Tarkovsky gives us a well-drawn portrait of lost innocence, devotion to a cause, and the (often futile) desire to protect the vulnerable.

SYNOPSIS (Courtesy of IMDb): During World War II, 12-year old Ivan works as a spy on the eastern front. The small Ivan can cross the German lines unnoticed to collect information. Three Soviet officers try to take care of this boy-child.

Strengths and Weaknesses: Even at his best, Tarkovsky is not the most well rounded director. He doesn’t care about narrative structure and would actually rather that you not be entertained. Here he comes closer than usual to character development. Ivan’s tragedy is poignant, and the adults who try to look out for him are sympathetically presenting. The ending is approached a bit oddly, but it’s affecting.

With Tarkovsky, it’s all about the moments of transcendence. His genius at capturing sublime images and moments is so off-the-charts great that the unsatisfying parts surrounding them don’t feel like weaknesses so much as the very worthwhile price of admission.

This is Tarkovsky’s first feature film, and it’s closer to having a traditional plot structure than anything else I’ve seen. But his lack of interest in standard narrative is obvious and presents some problems. Some scene transitions are brilliant, but others are ineffective and abrupt.

We understand that Ivan is engaged in reconnaissance, but Tarkovsky doesn’t care about the details so we’re left not really understanding what specifically is at stake. They’re doing something against the Germans in an offensive that’s occurring in some place at some point in the war with some nonspecific objective. Tarkovsky doesn’t mean to convey that it’s pointless — he’s clearly on the side of fighting back the Nazis — he just doesn’t care enough about the details to convey them.

Acting: Nikolay Burlyaev is outstanding as Ivan. (Tarkovsky went on to use Burlyaev as the bell maker in the great final segment Andrei Rublev, where he again casts him as a temperamental orphan.) Crucially, Burlyaev is just as compelling in the flashback scenes displaying innocence as he is in the war scenes. A great example of unaffected child acting.

Best Scene: Tarkovsky makes up for the clumsy transitions elsewhere with a haunting that takes us from the dismal present to the past, as Ivan and his mother peer down into a well. It’s brilliant on many levels and is the most Tarkovskyian moment of the film, exploiting disorientation to great effect. Ivan is imagined at the bottom of the well and at the top, and Tarkovsky pulls off a haunting effect by changing our perspective on the distant water so that the reflection suddenly seems close enough to touch.

Bonus Best Scene: The movie has a fairly uninteresting subplot involving the two male leads affections for a pretty medical officer named Masha. The sympathetic Lt. Galtsev is able to get her out of harm’s way, but not Ivan, so she’s mostly present to serve as a counterpoint. But Tarkovsky also uses a courtship scene in pine trees to extract some beautiful visuals. This brief shot straddling a trench couldn’t have been framed better.