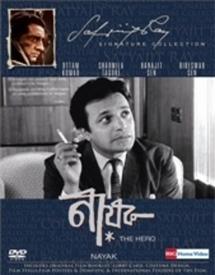 My Opinion: 6.8 || A well-designed, light-on-its-feet film that manages to imbue a seemingly threadbare plot with significance. It meanders a bit, and there are a couple unconvincing dream sequences. But good performances, a witty script, and efficient use of a train’s tight spaces make for an involving film.

SYNOPSIS (Courtesy of IMDb): En route to Delhi to receive an award, a Bengali film star reevaluates his success through his fellow passengers, dreams and past experiences.

Strengths/Performances: Uttam Kumar is very compelling as the suave but troubled movie star Arindam Mukherjee. Not only is he thoroughly convincing, but he handles many subtle but important shifts in tone up through the climactic dialogue. And Sharmila Tagore is nearly as good as the journalist Aditi. The underlying content is not all that weighty, but their performances (and Ray’s nimble direction) make it work.

The secondary characters are also handled very well. Ray directs with a sensitive style that allows even very small characters to be three-dimensional. Although some characters are meant to be humorous, there’s a pleasing absence of condescension.

Weaknesses: It’s a shame, but the DVD I watched had several problems, including frequent smudges on the film — much in need of a Criterion Collection rescue job. More annoying were the shoddy subtitles — whenever the characters switched to English, which was often, the lack of fidelity in the subtitles was glaring. And the white subtitles were frequently obliterated by white background, making stretches of dialogue invisible. It’s all the more impressive, then, that the wit of Ray’s script comes through as well as it does.

It’s interesting to compare Nayak to Wild Strawberries. Both follow a successful but haunted man en route to collect an award, with episodic encounters and a succession of dreams/flashbacks. I was lukewarm about the dream sequences in Wild Strawberries, and I’m not crazy about these either. It’s just very difficult to render the dream experience with realism — too often, as here, it comes across as a narrative device rather than a genuine view of the character’s subconscious. (For some entertaining snark about dreams, see this short piece from the novelist Michael Chabon.) And, as with Wild Strawberries, the plot here suffers from a meandering quality that inhibits narrative momentum.