My Opinion: 6.1 || Several fine pieces, but it doesn’t quite cohere as a story. The director manages texture and mood well, but he grabs too much from the same bag of visual flourishes and is better at displaying the characters than at exploring them.

SYNOPSIS (Courtesy of IMDb): Put in charge of his young son, Ali leaves Belgium for Antibes to live with his sister and her husband as a family. Ali’s bond with Stephanie, a killer whale trainer, grows deeper after Stephanie suffers a horrible accident.

Strengths: It’s a very well-acted movie, and Audiard deserves credit for avoiding many of the clichés that can afflict this kind of film. For the most part, he isn’t interested in pushing the normal buttons of an “overcoming adversity” movie, and you certainly wouldn’t accuse him of being overly cute or generous with his characters. His very active handheld camera is often effective, and the film has a consistent (sometimes too consistent) visual aesthetic.

Also, I’m astonished at the special effects here. You can take Avatar — what I want to know is how you make Marion Cotillard’s legs disappear. The images could not be more realistic. (I mean, Marion Cotillard does have legs, right? Don’t tell me Woody Allen CGI’d her body for Midnight in Paris.)

Weaknesses: I have problems with Audiard’s technique (see below), but my biggest reservation has to do with his handling of the characters. Although he’s unsparing in showing their flaws (particularly Ali’s), he reveals almost nothing about their backgrounds and delves very little into their inner lives. We see them naked, yes, but there are deeper places he could have gone.

The bond between Stephanie and Ali is nice because of its unusualness. By the same token, though, it’s hard to understand exactly where it comes from. Showing that they are drawn to each other is not the same as revealing why they’re drawn to each other. There are some obvious answers, but “She’s drawn to strength, and he’s strong” is pretty thin narratively and emotionally. It’s a good example of “attraction by fiat,” which is something that afflicts many (most?) romances. The storyteller tells the audience, in effect: “These characters are attracted to each other because I say so (because the story needs them to be).”

At the risk of piling on the criticisms (it’s not a bad movie), I’ll also say that the character of Ali’s son is very incomplete. He exists mostly as a plot device, which is never a good thing. 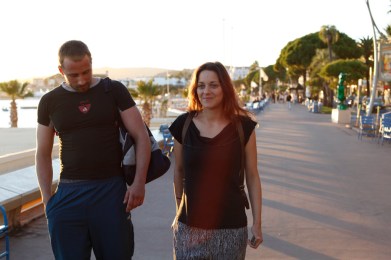 Technique: Unfortunately, there’s a point when an artist’s “consistent aesthetic” tips over into mannered repetition. Audiard is far too enamored in this film of shots in which sunlight saturates the bobbing frame. And I think he’s used a decade’s quota of lens flare effects. All fine devices in moderation, but there are points in Rust and Bone when it feels like a crutch — when you’re not sure what else to do with a shot, just hit that trusty lens flare button. The irony is that these effects are supposed to convey naturalism, but overusing them only calls attention to the director’s presence. 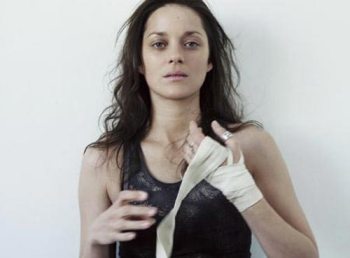 Characters/Performances: Cotillard is wonderful. So is Matthias Schoenaerts as Ali. The script is thinner than it should be for both of them, but they make the roles work.

Best Moment: The scene where Cotillard stands in front of the aquarium glass and directs an orca is beautiful. We also get what is probably world cinema’s first and last beautiful use of a Katy Perry song.