My Opinion: 6.5 || Some outstanding moments, a bold visual identity, memorable performances — and inspired use of music. But (great) style overwhelms narrative, and the lack of storytelling cohesion keeps it from being a truly great movie.

SYNOPSIS (Courtesy of IMDb):  Wong Kar-Wai’s movie about two love-struck cops is filmed in impressionistic splashes of motion and color. The first half deals with Cop 223, who has broken up with his girlfriend of five years. He purchases a tin of pineapples with an expiration date of May 1 each day for a month. By the end of that time, he feels that he will either be rejoined with his love or that it too will have expired forever. The second half shows Cop 663 dealing with his breakup with his flight attendant girlfriend. He talks to his apartment furnishings until he meets a new girl at a local lunch counter.

Strengths:  The movie’s best moments are all ones that make use of music. “California Dreaming” is used to excellent effect. It’s daring to repeat the same song so often and so prominently, but it works brilliantly (and gives me an excuse for using the word leitmotif). And the rest of the music is equally strong. Who’d have thunk that a Chinese Cranberries cover could be so intoxicating?

Weaknesses: It’s two movies. The first plot transitions to the second and there’s no arcing back. Wong (clearly a very resourceful director) could have linked them in satisfying ways, but he chooses not to, which is a shame. It’s been nearly 20 movies since the movie came out, and arguably the intersecting-storylines style has been overdone. Maybe I’m just too conditioned. But no, not really — you can’t make two separate movies and use nothing more than a common setting to pin them together. Wong creates a fairly interesting storyline in the first segment and then abandons it completely.

Best Scene:  It’s the interlude recalling Cop 663’s tryst with a stewardess. As the very attractive woman stands in the door in her underwear, we hear music overlaid with flight instructions, and she seductively mimes the instructions (even though they wouldn’t literally have been audible). As in so mamy scenes in the film, all of this is viewed through multiple layers, as Tony Leung plays with a toy plane that passes blurrily in front of us. So multiple layers of visuals + multiple layers of sound. Wonderful scene.

Technique: That effect of shooting everything through layers is consistently strong. Nearly every shot looks through windows or gaps in doorways or is shot from an odd angle. It’s an effective (semi) cinema verite technique that conveys a both intimacy (from the natural, peeking quality of the perspectives) and distance as the characters are so often separated from other people (and from the viewer).

The movie begins with use of disjointed slow motion, and Wong returns to it often in the first segment, usually in action moments, and then largely abandons it in the second segment. A good example of an effect that’s initially captivating but that quickly loses impact.

Acting: Faye Wong is delightfully pixieish, and Bridgitte Lin is riveting. (Some of the credit there goes to her get-up — blond wig, long raincoat, sunglasses at night. Contrived but she wears it with such aplomb that you can’t stop looking.) And Tony Leung — I hadn’t registered that he was in the movie, and it was wonderful to see him show up. A really magnetic actor. 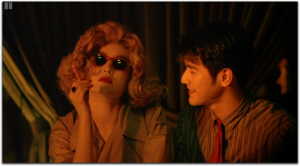 — Repeated questions about preference for pineapple. They can be funny. Mental note.

— Tony Leung is a really magnetic actor. I hadn’t registered that he was in the movie and loved seeing him show up.

— The first segment is weaker than the second, particularly the opening 20 minutes. Brigitte Lin was great to watch, but the parallel thread in which we follow the lovelorn policeman is slow to develop.at he was in the movie and loved seeing him show up.

— Voiceovers. I’m generally suspicious of them, and the use here is inconsistent. There are a few scenes where they work well, conveying information that couldn’t be communicated any other way. Other times, not so much. If you show a character leaving his pager, there’s no need to announce in a simultaneous voiceover, “I decided to leave my pager.”

File Under:  great use of music / impressionism / dreamy sensuality / crime