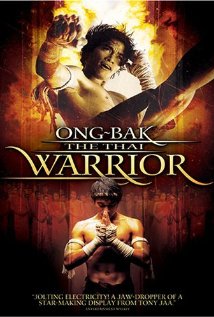 My Opinion: 3.6 || Really un-good. The martial arts are well choreographed, and Tony Jaa is a joy to watch when he’s in motion. And putting him in motion is pretty much the only reason the movie exists. The plot is weak, most of the performances are too hammy, and Pinkaew compromises even the best fight scenes with weird directing ticks and dull staging. The best I can say is that I didn’t hate it.

SYNOPSIS (Courtesy of IMDb): When the head of a statue sacred to a village is stolen, a young martial artist goes to the big city and finds himself taking on the underworld to retrieve it.

Strengths: Pinkaew occasionally fails to ruin the brilliant displays of muay thai martial arts. Tony Jaa is not much of an actor, but it’s astonishing what he can do with his body. I’ll also give the film a little credit for having a kind heart. The moral view is painfully trite (rural people: good, city people: bad), but a stupid plot is easier to take if it’s not also mean-spirited.

Weaknesses: The story is boring and derivative, the acting comes in only two flavors: flat or cartoonish, and the Pinkaew can’t get out of his own way. The fight scenes are filmed well to the extent that they let us see Tony Jaa doing his thing, but Pinkaew repeatedly shows replays of every move. Here’s that kick in slow motion. Here’s that same kick from a different angle. And here it is one more time from one more angle. It’s supposed to be a movie, not a two o’clock in the morning clips video.

Best Scene: When Jaa is forced into his first fight, he fells the supposedly fearsome guy with one almost-bored kick. It’s a nice way of demonstrating his prodigiousness as a fighter, his fundamental humility, and conveying a bit of (non-cartoonish) humor.