My Opinion: 6.6 || A deeply felt movie that’s distinctive but not distinctly successful. As a depiction of earnest religious devotion it rings true, but there’s little investigation of that devotion or insight into it. The protagonist is a fascinating and vivid presence, but he’s such an island himself that we never fully connect to his experience.

SYNOPSIS (Courtesy of IMDb): Somewhere in Northern Russia in a small Russian Orthodox monastery lives an unusual man whose bizarre conduct confuses his fellow monks, while others who visit the island believe that the man has the power to heal, exorcise demons and foretell the future.

Strengths: The remote, austere setting is used to good effect, and a sense of authenticity prevails throughout the film. The monks look like real monks, the cold seems like real cold, the snozberries taste like real snozberries. (Sorry, wrong movie.) Most important, the mad prankster Father Anatoly, who may or may not have some mystical powers, comes off as entirely realistic. An interesting, original creation: puckish, irascible, infuriating, kind, difficult, and passionately committed to God.

Weaknesses: Unfortunately, vivid is not the same as deep. For all the earnest originality of Father Anatoly’s character, he winds up being memorable but not especially revealing. The long-ago sin that’s driven him to this bizarre, mercurial piety turns out to be fairly pedestrian stuff that could have been lifted from a decent TV drama. And it’s resolution is both predictable and credulity-straining.

The director Pavel Lungin is clearly interested in spirituality and miracles, but shows little curiosity about the nature and origins of either. Father Anatoly’s apparent ability to heal the sick is treated with a prosaic straight-forwardness that depicts his spirituality in colorful detail but sheds little light on spirituality as an experience. We have surfaces with great texture but limited insight into what lies beneath them. 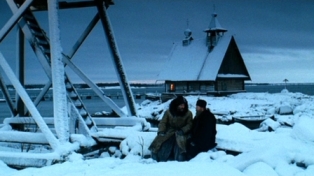 Characters/Performances: Pyotr Mamonov gives a memorable, committed performance as the holy fool, Father Anatoly. Dirty, haggard, and full-tilt on eccentricities but never “actorly” or forced. His fellow monks, Father Filaret (Viktor Sukhorukov) and Father Iov (Dmitriy Dyuzhev) are thoroughly believable. Sukhorukov seems like he might have walked over to the set from a genuine frontier monastery, and Dyuzhev looks like he emerged from a 19th Century Russian novel.